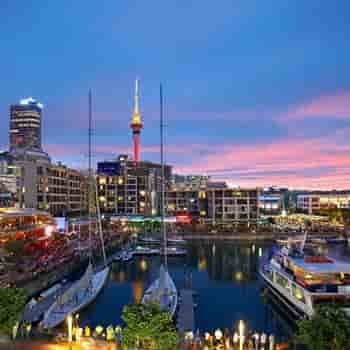 New Zealand is one of the most beautiful island countries in the world and attracts millions of tourists every year.

Before you plan your trip to New Zealand, you should be aware about some of the famous tourist attractions in Auckland for a perfect experience.

Whenever we think about any vacation, first question comes in our mind that when should we go? Some of the people are climate concerned so prefer a suitable time to visit

Did you know that New Zealand is a popular summer destination but don’t worry, summer and winter temperatures vary by only 10ºC to 15ºC in most of the country which makes New Zealand an ideal holiday destination year-round.

By now, you would be thinking that which month is most suitable for a visit? It is November to April. Yeah, you got just 2 months left so hurry up and book a hotel in Auckland, New Zealand.

Hotel Regal Residency is located in the east of the city, having some of the best views across the Auckland Harbor and just off the tranquil beaches of Mission Bay in St. Heliers, Regal Residency is perfect for travelers who want to be close to the city – but just far enough away to enjoy relaxed village atmosphere.

1. Sky Tower – Touch the sky
The iconic 328-meters tall Sky Tower is the tallest freestanding structure in the Southern Hemisphere and the 25th in the world

This tower dominates Auckland’s skyine due to height and unique design. This observation and telecommunication tower is also a hub for tourists which attracts 1100+ visitors per day and over 415,000 per year. It is the best among top Auckland tourist attractions.

The tower has a restaurant at 620 ft which rotates 360 degrees every hour. Interesting, isn’t it?

Things to do: Dining in the revolving restaurant, Orbit 360˚, and adrenaline adventure such as sky jumping and sky walking

2. Rainbow’s End – Enjoy to your heart’s desire
Rainbow's End includes the main theme park and also Kidz Kingdom, a family entertainment center for children 8 years and under but there are many more rides and attractions for an elder too.

Rainbow's End is the biggest amusement park in New Zealand. The rides fluctuate directly from child well disposed to all the more exciting ones like the Log Flume, Corkscrew Roller Coaster, and Power Surge.

So if you are fun-loving and having kids with you then this place is one of the most recommended place.

3. Queen Street – Shopping, Nightlife and more
The center point of Auckland attractions, the Queen Street is spotted with eateries, bistros and shops. Around evening time, it turns all the more charming with numerous neighborhood theater exhibitions, and unrecorded music appears. Workmanship fans also have a great deal to swallow as they walk around the Auckland Art Gallery, which shows fine arts from around the globe.

4. Cornwall Park
When you're in New Zealand, you can't miss this far reaching parkland which is a tranquil den for individuals to loosen up and enjoy recreational exercises. Cornwall Park, alongside having roads fixed with trees, has antiquated legacy locales, ranches, bistros and bistros, and a games ground. The volcanic cone, called One Tree Hill is one of the most striking highlights of the Cornwall Park. As yet thinking about the best places to visit in Auckland, New Zealand?

5. Waitemata Harbour – Crystal clear waters and glistening skyline of Auckland
Giving the principle ocean access to Auckland Waitemata Harbor, for a similar reason, is otherwise called Auckland Harbor. The name Waitemata originates from the Maori language and means obsidian glass. It was named so inferable from the shining water which looks like dull volcanic glass found in the locale by early-pilgrims.

Waitemata Harbor is considered a standout amongst other vacation destinations in Auckland as it permits a heavenly perspective on the Auckland city, something you'd need to look at for eternity.

Things to do: Boat ride, sailing, and cruise lunch

6. Rangitoto Island – Flaunting the youngest of Volcanic cones
In your NZ schedule, remember to include Rangitoto Island, one of the most notorious islands of the nation. It houses the biggest and most youthful of the 48 volcanic-cones in Auckland. It has its history going back to 600 years, when it all of a sudden rose up out of the ocean.
Successive ships employ among Auckland and Rangitoto, making it among the least demanding spots to visit close to Auckland. A portion of different offices incorporate toilets, and strolling tracks.

7. Mount Eden – A suburb with its own taste of life
Looking at the flashing horizon of one of the most compelling urban areas on the planet is nothing not exactly an enjoyment. The rural area, Mount Eden gives a mesmerizing 360 degree perspective on the city. It is probably the best spot to unwind and treat your eyes!

Likewise, please your taste buds with a neighborhood lunch in a bistro in the region. Visit the legacy spots and find out about the Maori people group. With rich green environs and sublime magnificence, Mount Eden is in fact one of the most wonderful spots to visit in Auckland, New Zealand.

8. Auckland Zoo – Home to the largest collection of animals in New Zealand
Covering an area of 40 acres, the Auckland Zoo is known to house an enormous number of creatures and winged animals. This is among the best time puts in Auckland as a visit isn't only about taking a gander at the creatures from far off, behind a fence; there are various encounters that make the visit unique. There are photography workshops, safari evenings, and off camera encounters to make your visit into an important one.

The Auckland War Memorial Museum was introduced in 28 November 1929, and from that point forward it has turned into a significant milestone of the city.